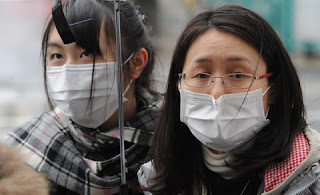 A brief look into the science behind tsunami and the risk involved in the Japanese tsunami and Fukushima nuclear reactors.

It was a Sunday, the day after Christmas. We were attending the lecture on fluid mechanics at one of the premiere coaching centres for entrance into the Indian Institutes of Technology in Chennai. Dr.Ananthan, a highly respected Physics teacher, speculated to have been considered for some of the highest honours in Physics in the last sixty odd years was pacing up and down the class (as he normally did) while trying to think of the best way to explain the concept in mind.

His driver, who was sitting in the car downstairs listening to the radio, ran up to our classroom completely panic stricken and announced that water in Marina beach was receding. The teacher dismissed this as some speculative news aired by careless media, and continued with the class. After a while, the driver was again at the door, this time claiming that the water was now flooding into the city! Chaotic information, and even more chaotic information dissemination. Luckily, the teacher decided to bow down to the pressure from the driver and to a few concerned parents who had seen the rising water levels on television and wanted to confirm the wellbeing of their wards.

This was my first impression about Tsunami that struck in 2004. Roads were blocked, and our persistent demand to the bus driver to take us through the road along Marina to have a prima face look at the radio jockey’s claims, were turned down. Little did I know until I came back home and saw in the television that we were talking about ferocious giant water waves more than thirty feet tall, travelling at almost 500km/h.

Tsunamis occur when there is a vertical displacement of the earth surface causing the water that occupied the region to turn into massive tidal waves full of energy ready to move in all directions. It is the energy that destroys cities and towns, and is depreciated by the resistance offered by the sea. The more the waves travel from the originating point (called epicentre) before striking the land, lesser is the energy content in them and hence the impact.

On March 11, 2011 at 2:36pm local time North Eastern Japan was rocked by their most powerful earthquake of the order of 8.9 on the Richter scale. By 3:40pm, water waves as high as 30ft strike on the Japanese coast washing away homes, vehicles and several other things in the process of invading the Japanese territory. But this was not to conclude thus.

Japan is low on fossil fuel reserves, and hence depends on nuclear energy for one third of their power requirements. The nuclear reactors in Fukushima have a rated capacity of 9096MWe and a fuel loading of 1100 tons U. In the wake of such a natural calamity, the impact on nuclear plant could turn things exponentially catastrophic. That is the reason why the entire world is now focussing on the possible nuclear impacts due to the Japanese tsunami more than any other aspects.

The biological impact of exposure to radiation is measured in Sieverts, abbreviated as Sv. An exposure to 500mSv, for however small a period of time, is considered very dangerous. An exposure to 20mSv is considered to be normal. However, health risks including an increased chance of cancer, mutations and deformed babies may result if radiation exposure exceeds 0.1 Sieverts. For one-time exposure of 0.5 to 0.75 Sieverts of radiation, nausea and vomiting will occur within hours, followed by hair loss.

In the long term, low exposure to radiation may cause cancer and genetic mutation while acute exposure in a short period of time can lead to skin damage, damage of the central nervous system or death, said Ngai Wai- tat, director of Hong Kong Baptist Hospital Nuclear Medicine Centre.

The Japanese officials have admitted that the radiation levels near the affected plants have been alarmingly high as 400mSv. There are multiple potential causes to a nuclear accident in Fukushima. For one, the repeated hydrogen and steam explosions in the plants would expose the nuclear core material resulting in massive penetration of radioactive elements in the vicinity, that could be very dangerous.

A nuclear reactor meltdown is a severe accident that results in the core of the nuclear reactor being damaged and exposed due to overheating. There can be a partial or complete collapse of the core, resulting in a large scale exposure to nuclear fuels with long half lives. Based on an improbable assumption that the nuclear fuel assemblies and control rods still retain their integrity in the Fukushima reactors, cooling with sea water mixed with boron as neutron absorber would help further damage.

Latest media reports claim that all six reactors at the Fukushima complex have problems — be it blown-out roofs, potentially cracked containment structures, exposed fuel rods or just the risk of explosion that has been great enough to force emergency measures, making it a bigger threat than the accident at Three Mile Island, but less impactful than the one at Chernobyl. The latest update as I wind up this article is that white smoke, in all likelihood steam, is seen coming out from the walls of the nuclear plant.

The radiation level reported in regions of human inhabitation is well below the dangerous levels mentioned above, and hence there is still hope of avoiding a massive nuclear tragedy. On a positive note, the Japanese are known to fight hard against nuclear attacks bouncing up to become one of the biggest economies in the world post World War II and hope they are able to redo the magic after this one as well.