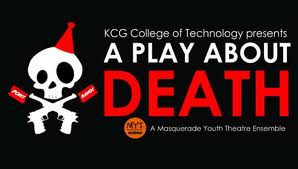 Has the loss of your loved one ever made you want to come face to face with death so that you can tear it apart? Or have you ever felt that you are just another character in a pre written play called life that ends with your death?

These are the two aspects that stand out in ‘A play about Death’ written by Thomas Manuel and Visvak Reddy that was staged at Alliance Francaise, Chennai over this weekend. The play was directed by Harish Aditya.

The play begins with a monologue by the character Peter. He describes himself as a playwright who wrote a play on death but before he could stage it, the lead character dies in an accident and hence has to abandon the plan. His role is central to understanding the concept of death described in the play.

Death, he says first, is nothing but a random unpredictable incident in everyone’s life. At a later point in the play, he debates with a fellow character Ralph whether death itself is the only proof of a real life?

Ralph is the other main character in the play whose role is central to the concept of life itself as a play. His argument with Peter on the differences in the life of a ‘real person’ and a ‘fictional character’ is both hilarious as well as thought provoking. Together they define the traits that distinguish a character from real person, while conveying the message that after all, we could all be characters in a play pre-written and directed by someone (you can say, God).

Emphasising on the concept that a character knows only that what his creator wants him to know, they also joke on man’s losing battle with information overload (his inability to know even the facts that directly concern him) and the distinction between friends and ‘facebook friends’. End of the play, they conclude, is death for the character.

A beautifully conceptualised and executed play by a bunch of post-teenagers, ‘A play about Death’ is indeed a hope for the bright future of Indian theatrics. The actors were brilliant. In particular, the guy who played Gordon, the common man. His natural yet humorous portrayal of the characters deserves special mention. The actor who played Ralph was emphatic to say the least, while the actions and dialogue rendition of the guy who played Peter were impeccable.

All in all, a well spent hour and a half. Must watch if you are interested in some satirical comedy on an abstract topic like death, that camouflages its philosophical message to be visible only to its seeker.

[I have consciously refrained from naming the actors here because I fear that I might mix up their names and roles. If someone can give me the correct mapping, it’d be great! 🙂 ]

2 thoughts on “A play about Death- Review”